Australia will host the eighth edition of the International Cricket Council T20 World Cup in November of 2022. Bangladesh will be participating in the super 12 group directly. Here is the details of Bangladesh T20 World Cup 2022 Live Streaming, Match Schedule, Fixtures, Squad, Time and Date.
There will be a match between Australia and New Zealand on October 22 in the main event. On October 24, Bangladesh will play its first match in the Super Twelve. On November 9 and 10, the two semifinals will be held in Australia. The final will take place at the Cricket Ground on November 13.

The eighth edition of the Twenty20 World Cup will be hosted by Australia in October and November. The International Cricket Council T20 World Cup will feature 16 teams. The four teams that advanced from the first round will compete in the Super 12 round.
The top two teams from each group of the Super 12 will qualify for the semifinals. The venues, groups, and top contender for the World Cup of Twenty20 will be looked at. Now check match schedule of Bangladesh at ICC TWC22.

The Bangladesh Cricket Board revealed a 15-man roster for the upcoming T20 World Cup in the late afternoon on Wednesday (14th September).
The two main points of discussion are the exclusion of Riyad and the inclusion of Shanto in the World Cup team. The World Cup was set up containing all the names that were anticipated. Let's look at Bangladesh's T20 World Cup squad in the years to come.

Here is the squad 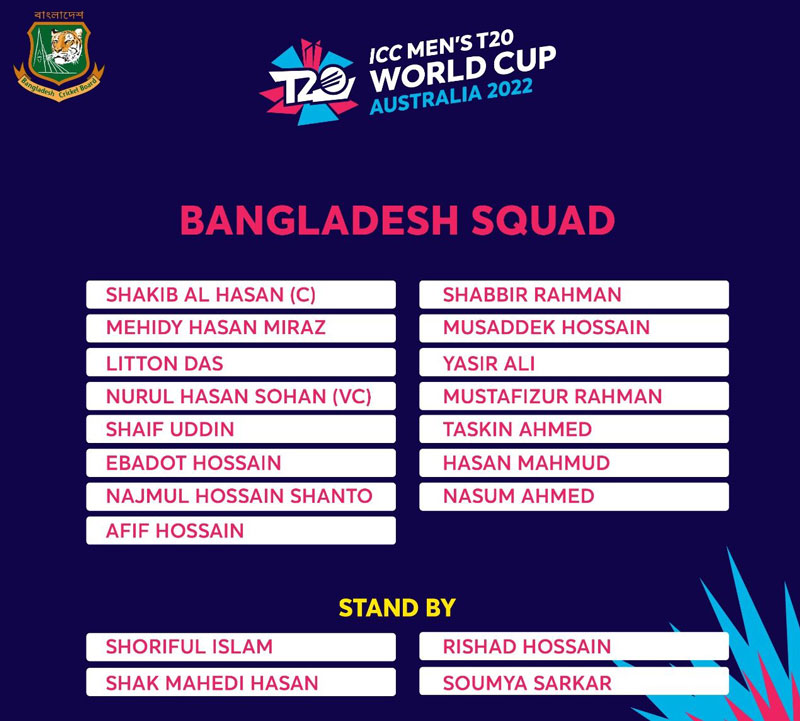 The cricket control board of Bangladesh (BCB) not reveled the Bangladesh T20 World Cup 2022 Jersey. Hope within some days BCB will publish the official Bangladesh Jersey for ICC T20 World cup. After that, you can download the image copy of Jersey from this page.
Published on September 20, 2022
Previous Post