As it uses Bangabandhu-Satellite-1, it comes with advanced broadcast features for the viewers. So, it is excellent news for Bangladeshi game lovers. You can now enjoy sports TV in your own country, setting in the home. Now that is the question How to watch T sports Live? Well, On this page you can watch this channel live.

T sports have promoted into SD to HD version, that's why it's called T sports HD. The Basundhara group launched t sports HD version in the first week of January 2022. The higher authority of the group knows what is suitable for this T sports channel.
Bangladesh National Cricket Board (BCB) has sold the television broadcast right for the next two years. Bangladeshi advertising company Ban-Tech has got the right to broadcast the national team's home series for 181 crores 63 lakh 32 thousand 611 takas. 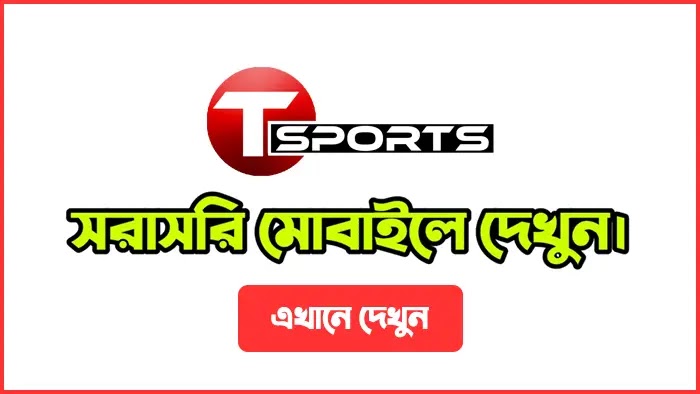 After that, the advertising company Ban-Tech resells the broadcast rights to Gazi TV and T Sports. So that. Next two years Bangladeshi cricket lovers can enjoy high-quality cricket production from Gtv and T Sports. Bangladesh vs Afghanistan series 2022 will be telecasted on T Sports.

Non-stop sports channel T Sports has broadcast live cricket matches since its inception. It has done an excellent job with this endeavor. T Sports, the sports channel of BD, has become much easier to watch because earlier we had to watch cricket on Gazi TV, but we can watch it now on T Sports.
Bangladesh-Pakistan-New Zealand Tri-Nation Series 2022 Live Streaming
There is no doubt that T sports is an excellent source for sports enthusiasts. The channel has been dedicated to bringing viewers the best in sports since its early days. Whether cricket, football, or any other game, T sports always offers something best in sports.

To prepare for this year's T20 cricket World Cup, the tri-series will kick off on October 7, with Bangladesh taking on Pakistan at the Hagley Oval in Christchurch.
It'll be played in a double round-robin format, with Bangladesh next taking on hosts New Zealand on October 9 and October 12 before playing Pakistan in their final league stage match on October 13 in the third, fifth, and sixth T20Is of the series. The final will be played on October 14 between the top two sides in the points table following the league stage.

The T20 World Cup will begin on October 16 in Australia. The world's biggest cricket event will finish on November 13 at the Melbourne Cricket Ground.
The knockout games of the Super 12 stage will be held in Australia, while the Super 12 qualification matches will be held in Oman. Cricket fans of Bangladesh can watch ICC T20 World Cup 2022 live on the screen of T Sports.

As the first sports channel in Bangladesh, T Sports has got the right to broadcast the upcoming Bangladesh premier league (BPL) 2023 session. BPL is the biggest franchise tournament of Bangladesh that operated by BCB. So, If you want to watch BPL Live 2023 online, then you can stream in on the screen of T Sports.

So, as a game lover, you can enjoy live matches. T Sports authority confirms this matter. The General Manager of T Sports, Tasvirul Islam, said that they were proud to get the media rights of this T20 cup. This tournament will be going reach most Bangladeshi people.

As the country's first sports channel, we have taken the initiative to live-broadcast all popular sporting events from the beginning - said Safwan Sobhan (vice-chairman of Bashundhara Group and managing director of T Sports)

T-Sports will introduce exciting TV shows besides showing FIFA World Cup matches. Football players who played in the World Cup for various countries in Europe and Latin America will join.
T Sports Chief Executive Ishtiaq Sadek said there had been multiple events in Bangladesh before the football world cup. Our thinking is not the same as that of others.
We want to create a program that can compete with international sports channels. Everything is well organized and planned in that way. Hopefully, our program will entertain the viewers of T Sports.

In Bangladesh Titas Sports TV in short T Sports became the leading sports channel in the country. Because it started its journey as the first sports channel of Bangladesh by Basundhara Group.
So, every cricket fan can easily access the cricket matches online on the T sports tv live via its official website Tsportsbd.com. Sometimes the authority of T Sports comes live on social media pages Facebook and Youtube channels also. Now let's know some short info about this channel.

Basundhara Group has excellent interest in games and sports. This group owns rangpur Riders. It is the cricket team in Bangladesh Premier League.
Besides, it is the owner of Sheikh Jamal Dhanmondi Club Ltd. It is a domestic one of the Dhaka Premier League. Check all recent rights of T Sports TV.

Cricket, football, kabaddi, hockey, tennis, boxing, and other important and popular sports events are covered by T sports. T sports is one of the best channels for sports fans because of its various games. T Sports Bangladesh also brought rights of Fifa World Cup 2022 Live streaming in Bangladesh. Now have a look at the list of events that T Sports cover.
Not only that, but this group also loves football and is the proud owner of Bashundhara Kings. For this reason, Basundhara Group decides to bring out a sports channel, and it is T Sports. Most of the crucial sports will be broadcast on T Sports Live.

So, T Sports Live is now the only place to enjoy BPL's domestic matches, and others stay at home. For the sports-loving people, T Sports brings little entertainment over this pandemic of COVID-19. Enjoy the matches and sports news from this channel. Set safely at home and enjoy the live broadcasts without taking any risk.
Most people in our country will love this channel and think of it as their own and only sports channel. You need not think about missing the broadcast of domestic sports and events. It is a really incredible experience for football and cricket lovers.
Published on October 01, 2022
Load comments